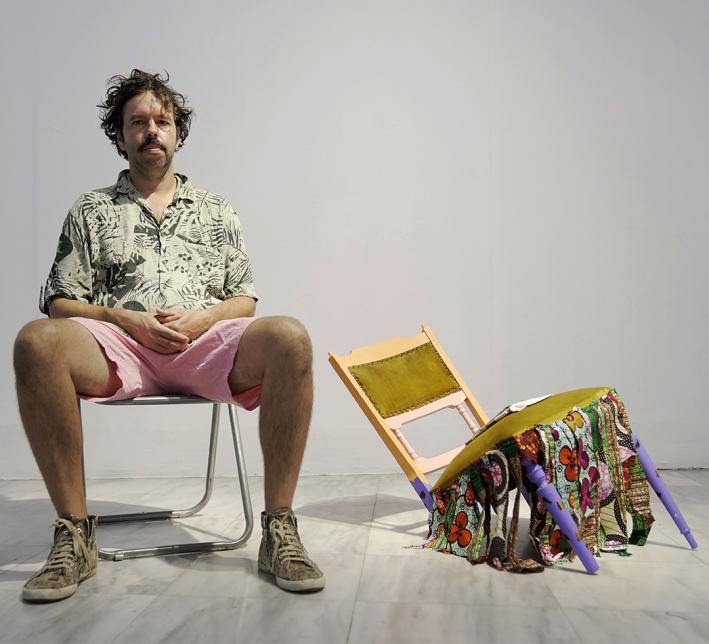 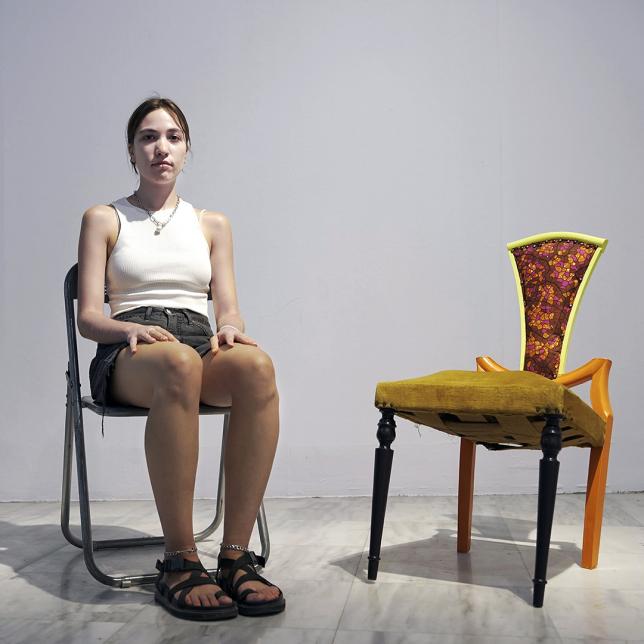 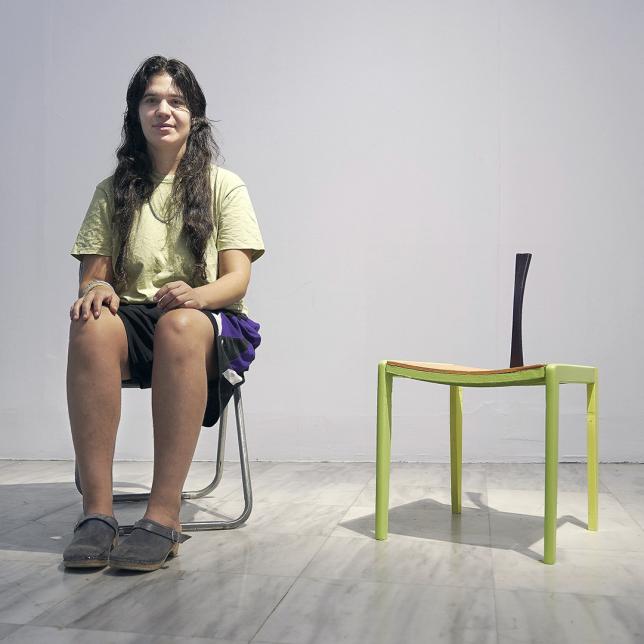 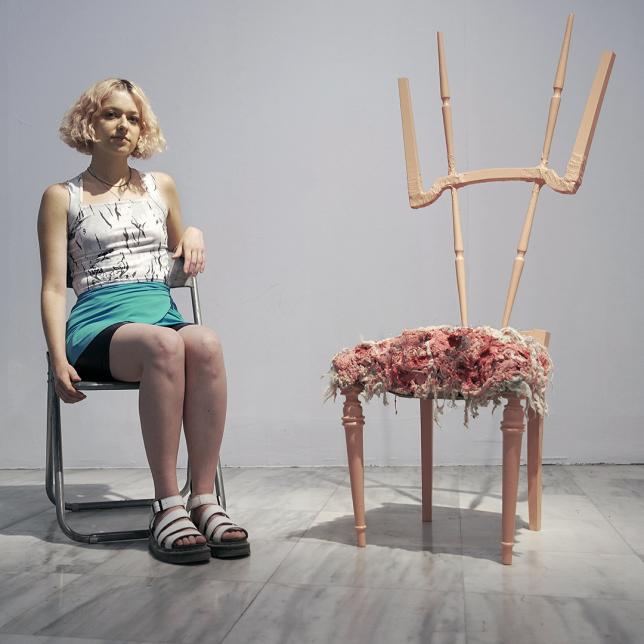 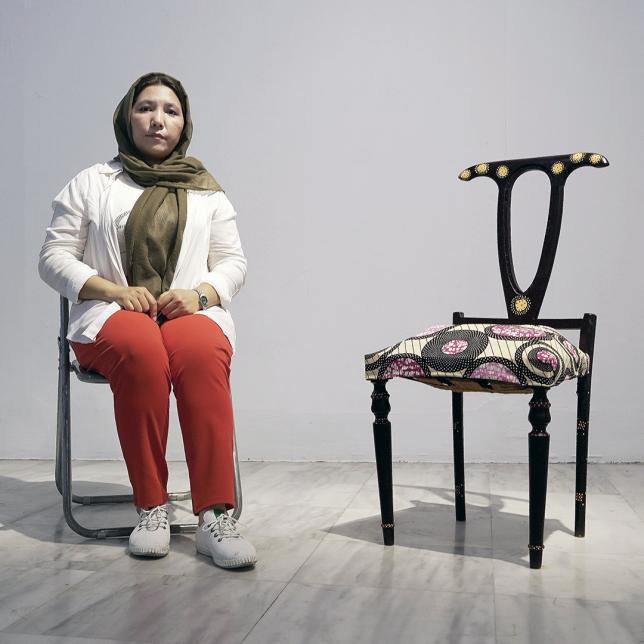 “Hot anger is not capable of cooking yams”
In my opinion, hot anger and cooking yams in the same sentence creates an oxymoron. Hot anger obviously holds a negative and maybe even an aggressive connotation but yams, especially hot yams are very homely to me because they remind me of London, a city I love. I added anger into the chair by using the bright red and then altered the fabric in order to make it look like yams. Rather than pitting these two vastly different things against each other, I wanted to put hot anger and yams together in one harmonious peace, indicating that they can come together as one despite their polarity.
— Archontoula

“Love never gets lost, it’s only kept”
I made this piece as a representation of the love that my mother gave me growing up and until now. She loves flowers so I wanted to make the chair full of it and make it look like a garden. Personally, a garden also represents beauty and happiness; qualities that I find are important when it comes to love. Through the addition of the flowers, I also want to show that love should be pure and beautiful but also complex because just like how a flower is made up of many parts and has many different colours, love is not just something simple but something that has many dimensions.
— Fariba

“No matter how dark it is, the hand always knows the way to the mouth”
I decided to create a chair based on this parable because of my prior interest in the similarity between anatomy and furniture. Considering this, I decided to alter the chair by cutting the legs so that it falls at an angle to imitate a person who is lying down: the chair’s legs represent the feet and the hole that I left in the back rest the person’s mouth. As much as possible I wanted to keep the chair intact, not changing much to its skeleton as it puts more emphasis on the similarity between it and a body. To further imitate a person, I used external elements such as a glove for a hand and strips of fabric for a skirt. In addition, the glove plays an important role because I didn’t just use any glove, I used a worker’s glove because I wanted it to represent the fact that just like the raw material of the chair, wood, art should also be considered a commodity as it is produced through one’s hard work and labour.
— Georgios

“If you can’t dance well, you’d better not get up”
As a former dancer, when I read this parable it gave me a discouraging feeling, so I sought out to make a chair that goes against it and will transpose a more positive energy. The front portion of the chair is more dark and solemn to show a person holding themselves back because they forced themselves to or because others stopped them, a mental state that I often find myself in. To contrast this negative energy, I made the back portion of the chair more colourful and brighter, and cut the legs at an angle to show that the chair is tipping over to the positive side; that a person is leaving all this self-doubt and negativity behind and stepping forward even if they aren’t good. I want to tell my audience to push themselves off the chair that is holding them back and dance in any direction they want even if they’re not good because nothing can ever happen if you just sit still.
— Artemis

“If you don’t wish to have rags for clothes, don’t play with a dog”
Firstly, I decided to take the top part of the chair apart and put it back together like a game of Lego. I chose a particular piece of wood from what was taken out because it reminded me of a dog’s chew bone and when it was reattached to the chair it looked like a tail, fully turning my chair into a little dog. In general, I wanted to give this piece a whimsical and childlike feel to it, and this decision greatly affected my choice of colours which was perfect because these colours also reminded me of rags.
— Labrilena

“Hot anger is not capable of cooking yams”
At first, I only wanted to make a functional chair but when I read my parable all I could think of was a land full of yams and that is what I tried to capture in the chair, specifically the different kinds of yams as they come in many different colours, and there was fabric that showed the exact ones; brown, orange and purple, I also painted the style of the chair pink because I’ve seen pink yams in my country before, but haven’t seen them anywhere else since then. The green I added imitates the leaves of the yam and the dark colour a representation of the soil, the land in which the yams grow in.
— Mohammed

“Love never gets lost, it’s only kept”
The most important love for me is the love I have for my family and the love they give me. To portray this familial love, this storge- I decided to build a nest with a mother bird and her children on top of a tree, the chair. I wanted to rest love on top of the tree because I think it is one of the strongest and long-lasting forms that can be found in nature meaning that love should have a strong foundation, full of life and forever protected even when it’s gone. I also decided to let the springs of the chair hang down and tied fabric hearts onto it in order to show that love is natural and it stems from the world that we stand and live in and will be there for as long as the world is alive.
— Nasrin

“Hot anger is not capable of cooking yams”
Based on my personal experience, the art of cooking can be intimately connected to one’s emotions as both are very organic. Anger and love are the emotions I closely associate with cooking, so I painted the filling of the chair red and pink to represent those emotions. Just like a recipe that requires multiple ingredients in order to make a good dish, a person cannot function if they only concentrate and act on one emotion such as love or anger, we need to find a balance between many different emotions and come to peace with them in order to come out triumphant which is why the chair also looks like a throne.
— Nassia, ‘The Throne of the Cook’ chair

“Milk and honey have different colours, but they share the same house peacefully”
To symbolise both milk and honey I used what was given: I chose to use the particular fabric because of its creamy background colour that reminded me of milk, and a warm yellow paint to represent honey. To give more focus to both these features I decided to paint the chair a dark purple. I also wanted to represent my culture in this piece by using yellow paint to stipple designs that imitate traditional Afghan art that are usually found on traditional fabrics, each with a different meaning and can be used as clothing during national celebrations. I decided to cut the backrest this way in order to make it look like a strong back, as if someone was wearing these patterned traditional clothing boldly and proudly.
— Parwana

“Love never gets lost, it’s only kept”
When I think of love I think of the love between family and with this piece I wanted to show that just like how love from a mother is important, love from a father is equally as important. I wanted to turn the chair into a father by cutting the neck rest and reattaching pieces for it to look like a moustache, something that represents a father in my opinion. I also painted a fun floral design on the moustache to represent that fathers add life and fun to a family, and I decided on the colour pink for the whole chair is because it is a colour of love and though it is always associated with women, I believe colour has no gender. Finally, when I picked the chair, I realised that it is not stable and that accurately describes what a family without a father is; just like a mother, a father is crucial for a family to function.
— Zahra